Who wants to earn over $3k a day for doing next to nothing?

That’s what the Free Ad Cash System website promises it will help you to earn. Better still, it *claims* it doesn’t want any money from you to make it happen. 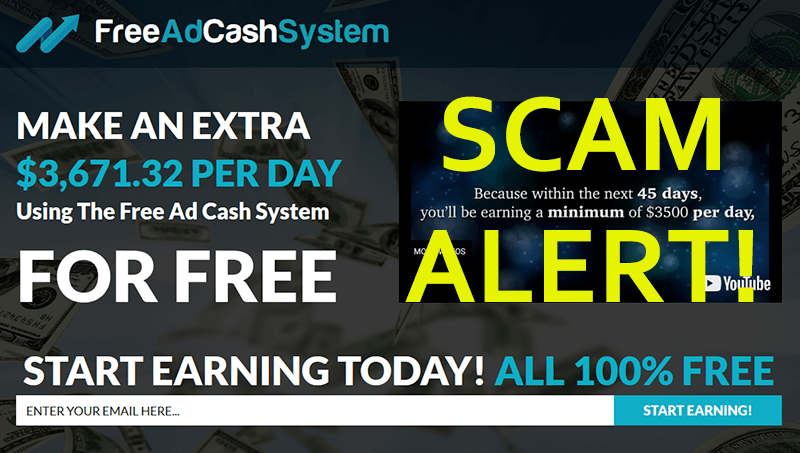 Right from the start, I can tell you this Free Ad Cash System scam is a very devious product, and the connections it has suggest this is a lot more than a one-off scam.

What’s The Free Ad Cash System All About?

From the website alone it’s very difficult to tell.

The image above is basically all you get to see on the Free Ad Cash System website. There’s the promise of making over $3600 per day online, but there’s no indication of how you will actually earn it.

The main area of focus is a 20-minute video where you are mostly encouraged to sign up for the Free Ad Cash System because it will change your life.

I will dissect this video in greater detail shortly, but let’s first take a look at a couple of pressure tactics being used.

At the top of the Free Ad Cash System website, you are shown members who are apparently earning money with the system…

And then there’s a ‘limited availability’ counter that is designed to make you feel that you must sign up quickly.

It’s not immediately clear who created the Free Ad Cash System, but when the video starts we learn that a guy called Simon Green is behind the program.

Note that you don’t actually get to see Simon…you only get to hear his voice. Straight away this is a concern because to help build trust with potential customers online, you should at least show them who you are.

Simon goes on to explain how life was going great until he lost his high-flying job following a serious illness. From that point onwards, life started to spiral out of control for Simon and his family.

Fortunately for Simon, his brother-in-law, Mike, stepped in to save the day.

Mike was in the process of trying to tie up a big deal and asked Simon if he would help manage his finances.

Being the curious type, Simon asked the nature of this big deal, and Mike – almost reluctantly – told him it was to do with “Ad Flipping”.

Needless to say, Simon eventually got his hands on the same system, and over the last couple of years, he claims to have earned over $22m by flipping ads.

According to Simon, he is now known as Simon “The Flipper” Green due to his incredible success, and he now wants to take a handful of people and change their lives in the same way.

I am of course being slightly flippant here because this story is purely designed to persuade the visitor to trust Simon and sign up for the Free Ad Cash System.

I doubt very much if Simon actually exists…it’s probably a voice actor reading a script.

I have also seen a very similar style of manipulation being attempted before, and if I’m being honest I believe there’s a strong connection between both programs.

Throughout the video, we are introduced to individuals who claim to have made a lot of money with the Free Ad Cash System.

Unfortunately, they are the same group of actors who have provided numerous fake testimonials for many other well-known scams. 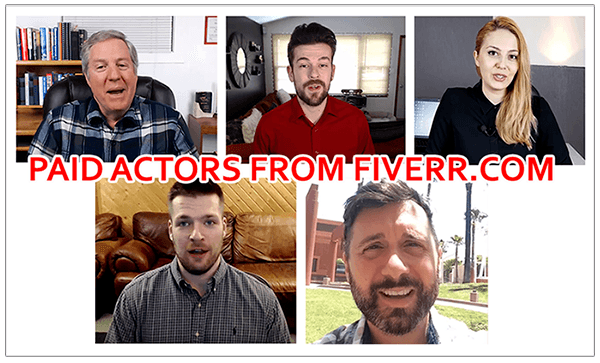 The claims made by these actors only fan the scam flames even further.

A guy being recorded up against a green screen to project an image of a sofa behind him – he started making money immediately and has since cleared all of his debts.

And a guy looking worried about who was watching as he recorded his video outside…he’s clocked over $250,000 in 47 days. 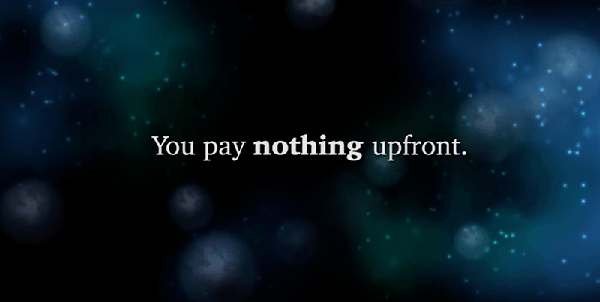 But then later in the video, Simon tells us that we need to invest a minimum of $250 to start using the Free Ad Cash System. He even takes things a step further… 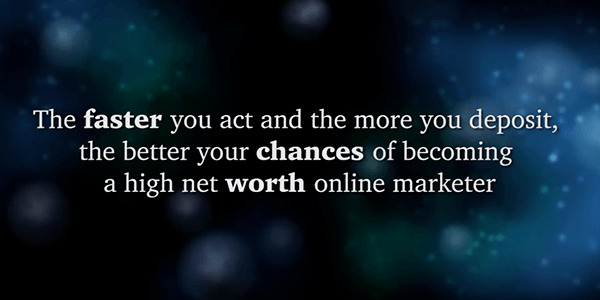 These are classic scam tactics being used to manipulate the visitor into trusting Simon and his Free Ad Cash System program.

No product out there will help you to earn the kind of money Simon is suggesting in such a short space of time.

You are much better off using proven methods that are guaranteed to increase your income gradually over time.

The Big Question:
What Exactly Is ‘Ad Flipping’ And How Do You Make Money From It?

“Ad flipping” is too generic a term to decipher, and I believe Simon is being intentionally vague until you hand over your details.

In fact, when you do hand over your details as I did, things are still very cryptic.

You get another video message from Simon welcoming you to the members’ area. Bizarrely, he then asks that you hand over your details once more.

It’s here that we are shown more fake testimonials, and it’s interesting to note that they now include a starting balance.

This is another pressure tactic put in place to encourage you to make a decision on your financial investment.

The most persuasive example is Ben F because he’s reported to have earned over $1m for investing $750, but even Shannon K has earned over $650k from $250.

This is designed to tip any fence-sitters towards one of the first two investment amounts.

Alas…still no clues as to what ad flipping is all about.

Searching further for clues, I retraced my steps and watched the Free Ad Cash System video on YouTube. Oddly enough, it had a very different name – bannerbit.com

In case you don’t know, Bannerbit.com has previously been exposed as an online scam that promised to make people rich for…flipping online advertising!

The collective opinion of the internet is that BannerBit was a company set up to make people think they could profit by selling ads to others who joined the program. 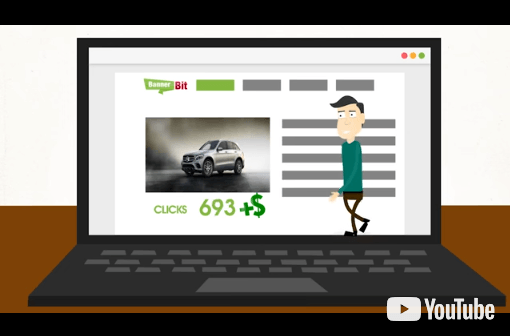 In truth, it was a system that was probably used to harvest contact details of people who wanted to make money online, for future profit.

And the BannerBit website is STILL active to this day, and it looks rather tidy… 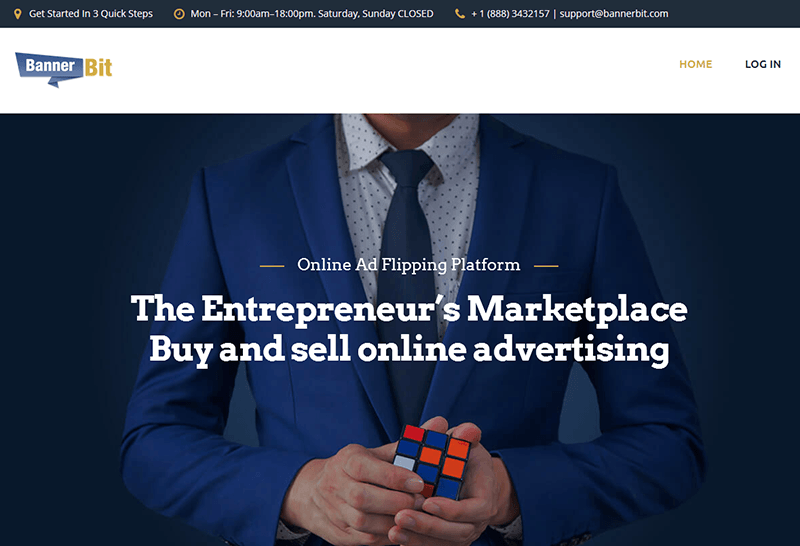 Smart-looking or not, when BannerBit and its ad flipping processes were exposed, word spread like wildfire.

Curious to establish exactly what was going on, I tried to contact the BannerBit support team via email.

My specific question was “Are you connected to the Free Ad Cash System?”

I received a reply 3 days later and they refused to confirm anything without me calling them.

I said I wasn’t prepared to do that and again asked for confirmation about the Free Ad Cash System. I got the following reply… 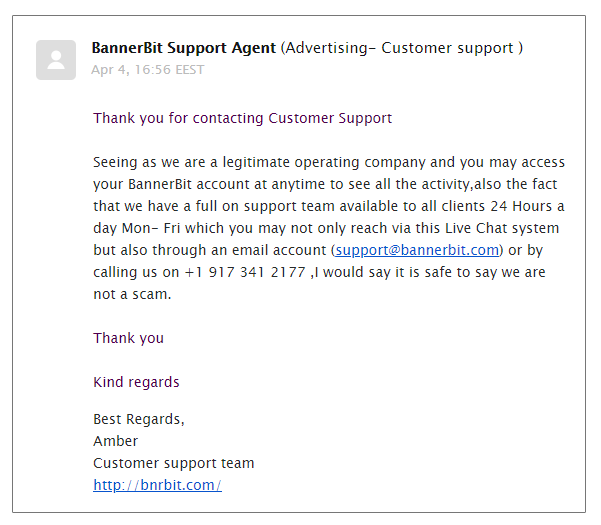 This all looked very generic to me, and they would still not confirm any connection with the Free Ad Cash System website.

Also interesting to note that Amber signed off with a website that was new to me – bnrbit.com. It takes you here: 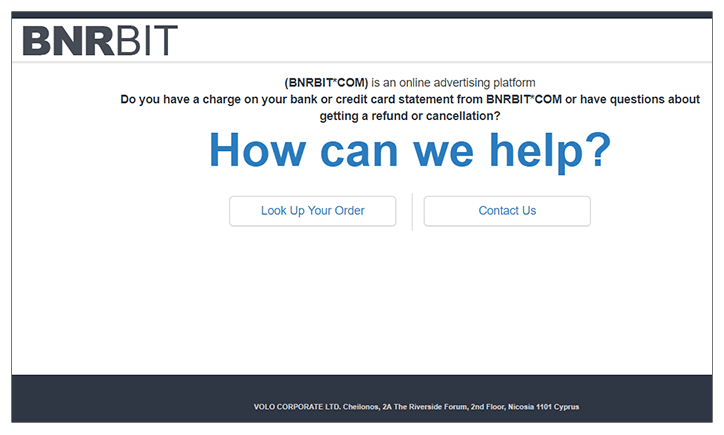 Very strange! This appears to be a website that purely handles refunds.

What The Heck Does All This Mean?

Okay…here’s what I think is happening.

The Free Ad Cash System originally linked to the BannerBit website and the ad flipping process.

When BannerBit was exposed by others as a scam, the Free Ad Cash System website diverted its visitors to another scam favorite – binary trading.

This explains why I have received emails from people who have been scammed by a binary trading website through the Free Ad Cash System.

As of right now, you cannot join BannerBit through their website, or through the Free Ad Cash System website, but I guess that could change.

It looks like the brnbit.com website has been set up purely to refund people who lost money to BannerBit.

But what the Free Ad Cash System website WILL do as of now is hook you up with a binary trading broker, and earn commission payments from you in the way that binary trading scams do.

Here are a few reviews of websites that have done this previously:

Notice how similar these websites all are?

I think it’s more than a coincidence. I think they are all connected.

The Free Ad Cash System cannot be viewed as a genuine way to make money online because the process that is currently in place was previously exposed as a scam.

Previously, it was also linked to BannerBit, which has also been exposed as a scam by others.

Therefore, The Free Ad Cash System can only be regarded as a scam because it operates using previously exposed scam tactics.

There is no way you can earn over $3000 per day with it, and if those connected programs are anything to go by, it is more likely to cost you $1000’s.

But my bigger concern is the spread of what appears to be a bunch of very similar scams across a variety of websites.

It’s my opinion that when one of these websites is exposed, it’s simply reinvented with a new name, website, and a few minor variations.

And be careful out there because these are often advertised on popular authority websites without the owners knowing.

On the back of the above, I can only advise that you keep your money safe and avoid using the Free Ad Cash System. 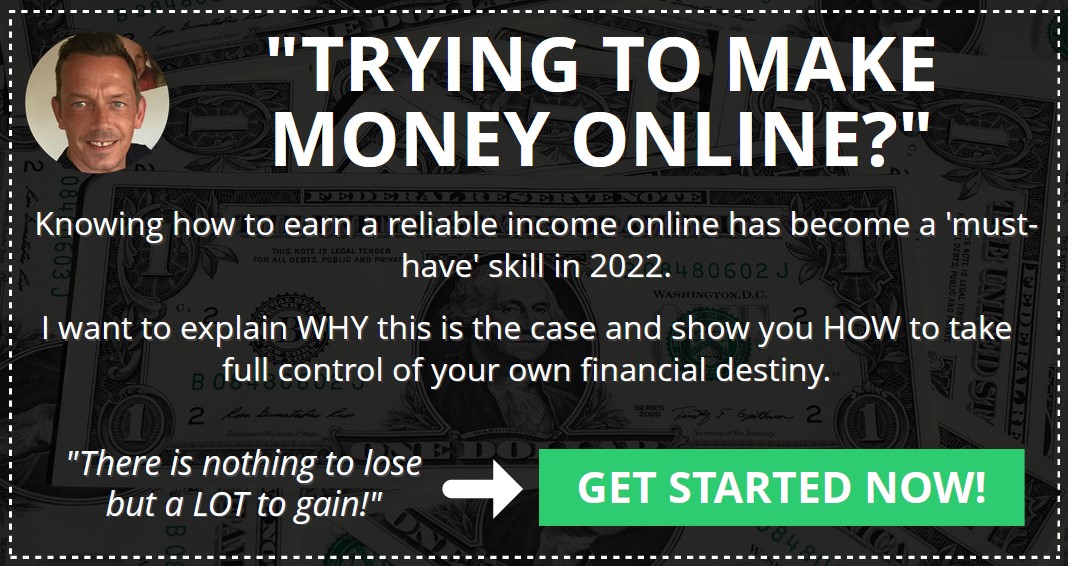 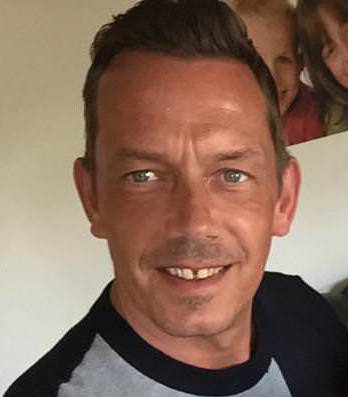 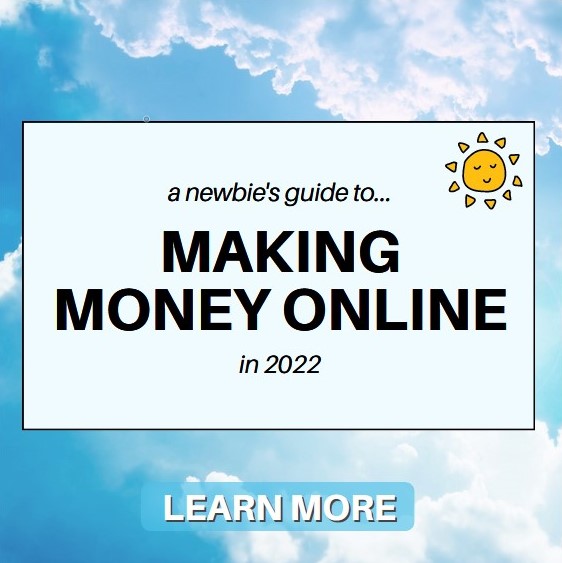 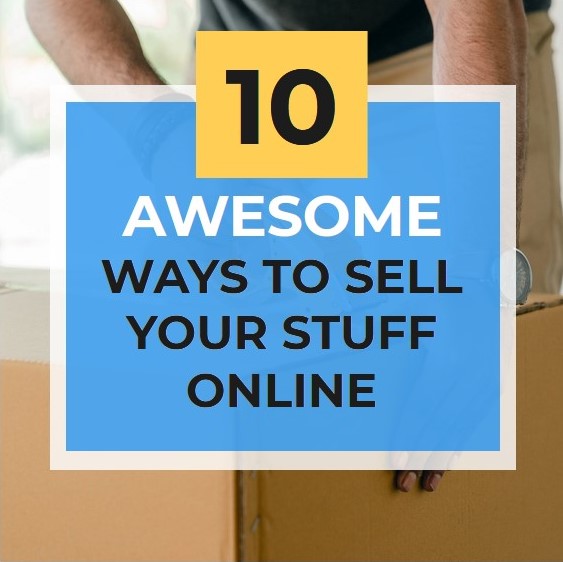 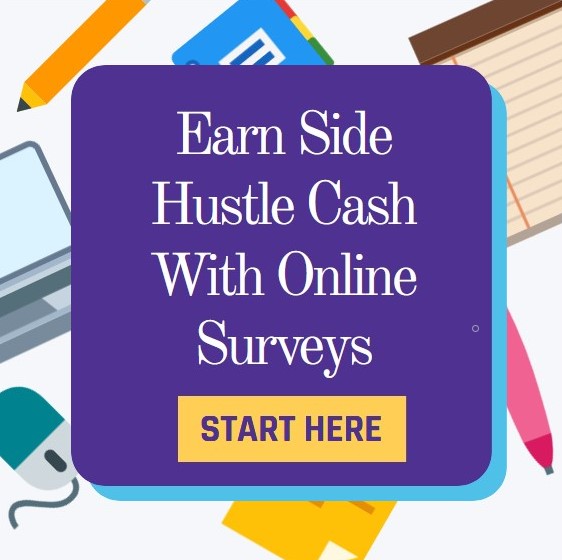 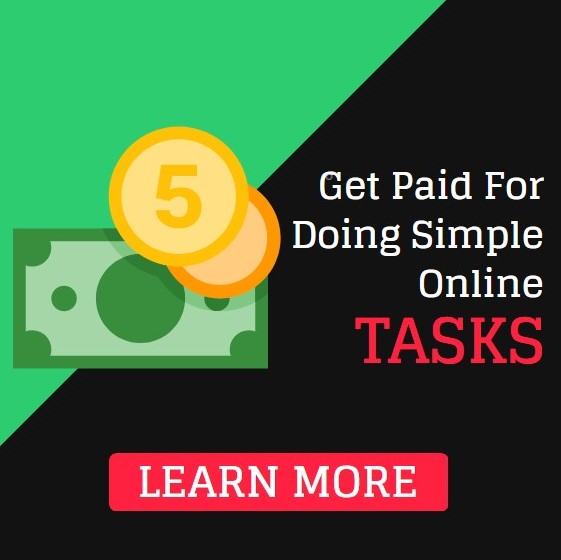